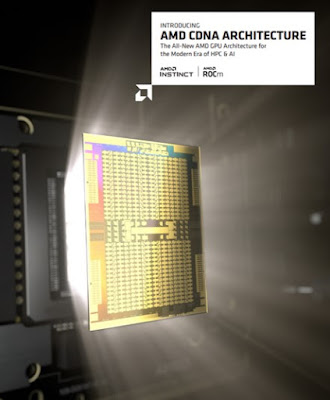 During this year’s SC20 virtual tradeshow, AMD (NASDAQ: AMD) is showcasing its leadership in the high performance computing (HPC) industry. It launched the new AMD Instinct™ MI100 accelerator with ROCm™ 4.0 open ecosystem support and showcased a growing list of AMD EPYC™ CPU and AMD Instinct accelerator based deployments, and highlighted its collaboration with Microsoft Azure for HPC in the cloud. AMD also remains on track to begin volume shipments of the 3rd Gen EPYC processors with “Zen 3” core to select HPC and cloud customers this quarter in advance of the expected public launch in Q1 2021, aligned with OEM availability.

The new AMD Instinct™ MI100 accelerator, is the world’s fastest HPC GPU accelerator for scientific workloads and the first to surpass the 10 teraflops (FP64) performance barrier . Built on the new AMD CDNA architecture, the AMD Instinct MI100 GPU enables a new class of accelerated systems for HPC and AI when paired with 2nd Gen AMD EPYC processors. Supported by new accelerated compute platforms from Dell, HPE, Gigabyte and Supermicro, the MI100, combined with AMD EPYC CPUs and ROCm 4.0 software, is designed to propel new discoveries ahead of the exascale era.

“No two customers are the same in HPC, and AMD is providing a path to today’s most advanced technologies and capabilities that are critical to support their HPC work, from small clusters on premise, to virtual machines in the cloud, all the way to exascale supercomputers,” said Forrest Norrod, senior vice president and general manager, Data Center and Embedded Solutions Business Group, AMD. “Combining AMD EPYC processors and Instinct accelerators with critical application software and development tools enables AMD to deliver leadership performance for HPC workloads.”

AMD and Microsoft Azure Power HPC In the Cloud

Azure is using 2nd Gen AMD EPYC processors to power its HBv2 virtual machines (VMs) for HPC workloads. These VMs offer up to 2x the performance of first-generation HB-series virtual machines, can support up to 80,000 cores for MPI jobs, and take advantage of 2nd Gen AMD EPYC processors’ up to 45% more memory bandwidth than comparable x86 alternatives.

HBv2 VMs are used by numerous customers including The University of Illinois at Urbana-Champaign’s Beckman Institute for Advanced Science & Technology which used 86,400 cores to model a plant virus that previously required a leadership class supercomputer and the U.S. Navy which rapidly deploys and scales enhanced weather and ocean pattern predictions on demand. HBv2 powered by 2nd Gen AMD EPYC processors also provides the bulk of the CPU compute power for the OpenAI environment Microsoft announced earlier this year.

AMD EPYC processors have also helped HBv2 reach new cloud HPC milestones, such as a new record for Cloud MPI scaling results with NAMD, Top 20 results on the Graph500, and the first 1 terabyte/sec cloud HPC parallel filesystem. Across these and other application benchmarks, HBv2 is delivering 12x higher scaling than found elsewhere on the public cloud.

You can see more about the AMD and Azure collaboration in this video with Jason Zander of Azure and Lisa Su of AMD.

AMD Continues to Be the Choice for HPC

AMD EPYC processors and Instinct accelerators have the performance and capabilities to support numerous HPC workloads across a variety of implementations. From small clusters at research centers, to commercial HPC, to off premise and in the cloud, to exascale computing, AMD continues to provide performance and choice for HPC solutions.

Hewlett Packard Enterprise (HPE), CSC Finland and EuroHPC recently introduced a new pre-exascale system, LUMI. Based on the HPE Cray EX supercomputer architecture, LUMI will use next generation AMD EPYC CPUs and Instinct accelerators and is expected to provide a peak performance of 552 petaflops when it comes online in 2021, making it one of the fastest supercomputers in the world.

Beyond LUMI, AMD powered HPC systems continue to grow in volume. Since SC19, there have been more than 15 supercomputing systems announced using AMD EPYC CPUs, Instinct GPUs, or both. A highlight of the systems includes

Northern Data – a distributed computing system in Europe that is using AMD EPYC CPUs and Instinct accelerators for large scale HPC applications such as rendering, artificial intelligence and deep learning,

“With the Expanse supercomputer, our goal is to give scientists and researchers cloud-like access to a high-performance machine that can handle everything from astrophysics to zoology,” said Michael Norman, Director of the San Diego Supercomputer Center.  “The 2nd Gen AMD EPYC processors have helped us achieve fantastic performance with Expanse, enabling our researchers to do more science than before. We also have a great collaboration with AMD and have worked together to create a forum for AMD HPC customers to share experiences, information and more, to better benefit HPC research.”

Paving the Path to Exascale Computing

“Frontier, powered by AMD, represents a huge increase in computational power compared to today’s systems. It’s going to allow scientists to answer questions that we didn't have the answer to before,” said Bronson Messer, director of science, Oak Ridge Leadership Computing Facility. “The ability to run molecular simulations that aren't just a few million atoms, but a few billion atoms, provides a more realistic representation of the science, and to be able to do that as a matter of course and over and over again will lead to a significant amount of important discoveries.”

AMD continues to provide the performance, capabilities and scale needed to power current and future HPC workloads, no matter if they are helping students at a research center, improving aerodynamic efficiency for an auto manufacturer, or providing valuable insights for critical medical breakthroughs.