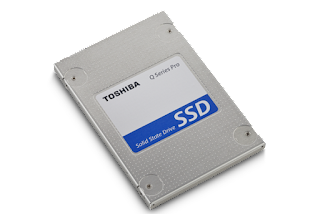 Following businesses colossal demands for a much secure data backup solution, Toshiba has just revealed their all new research and development in regard of coming up with some of the world’s most sophisticated and ultra-modern SSD chips that will bring unimaginable data storage and reliability capabilities.

The story doesn’t stops at breaking the news for Toshiba’s new product developments but in addition to that Intel has also initiated their very own project for state-of-the-art high capacity SSD chips with a planned mass manufacturing starting exactly by 2016’s first quarter.

What has astound the entire pool of SSD enthusiasts is the AES 256-Bit Full Disk Encryption, IEEE 1667 Drive encryption and many other intuitive features. Right after the official press release from manufacturers. These NAND SSD Chips have become the center of gravity for the entire data backup industry including renowned industry critics and resellers across the globe.
Coming back to the global internet security concerns, still businesses have a number of security and confidentiality risks, more specifically when it comes to cloud data storage and many other data backup solutions. Yes performance and security are one of the most demanded features but following continues privacy breaches businesses have faced prominent losses and have entirely focused on systems and solutions that ensure absolute security to them.

While digging deep into these emerging new product developments, resources have also identified that Toshiba has a clear plan to start their very own SSD chips’ mass manufacturing by February 2016. Toshiba already gained significant fame and market shares with its 16 GB 48-Layer NAND chips considered to be the world’s first ever mass manufactured line of NAND Chips. In addition to that Samsung also came up with their SSD 850 Pro Chips which was not at all a bad start for one of the market’s renowned brands.
The arrival of these state-of-the-art SSDs is indeed appreciable but in addition to that businesses can’t resist looking onto many other data backup solutions such as the magnetic media backup tapes. Looking deeper into the media backup tapes, the great consortium led by IBM, HP and Seagate brought the Ultrium LTO series of magnetic media tapes which have also become one of the most trending data backup solutions for small and large scale businesses all across the globe.

, Magnetic Media Tapes have successfully positioned themselves on top of the list for most of the world’s medium and large scale businesses based on their discrete data storage needs whereas these upcoming SSDs are sure to deliver an extra value to the customers once they arrive in the consumer markets.
at 5:15 PM